So the shitty insurance company sent me a survey asking for my feedback.
I haven't had the mental capacity to put into words my feedback. I just finally got around to doing it..
It looks like this: 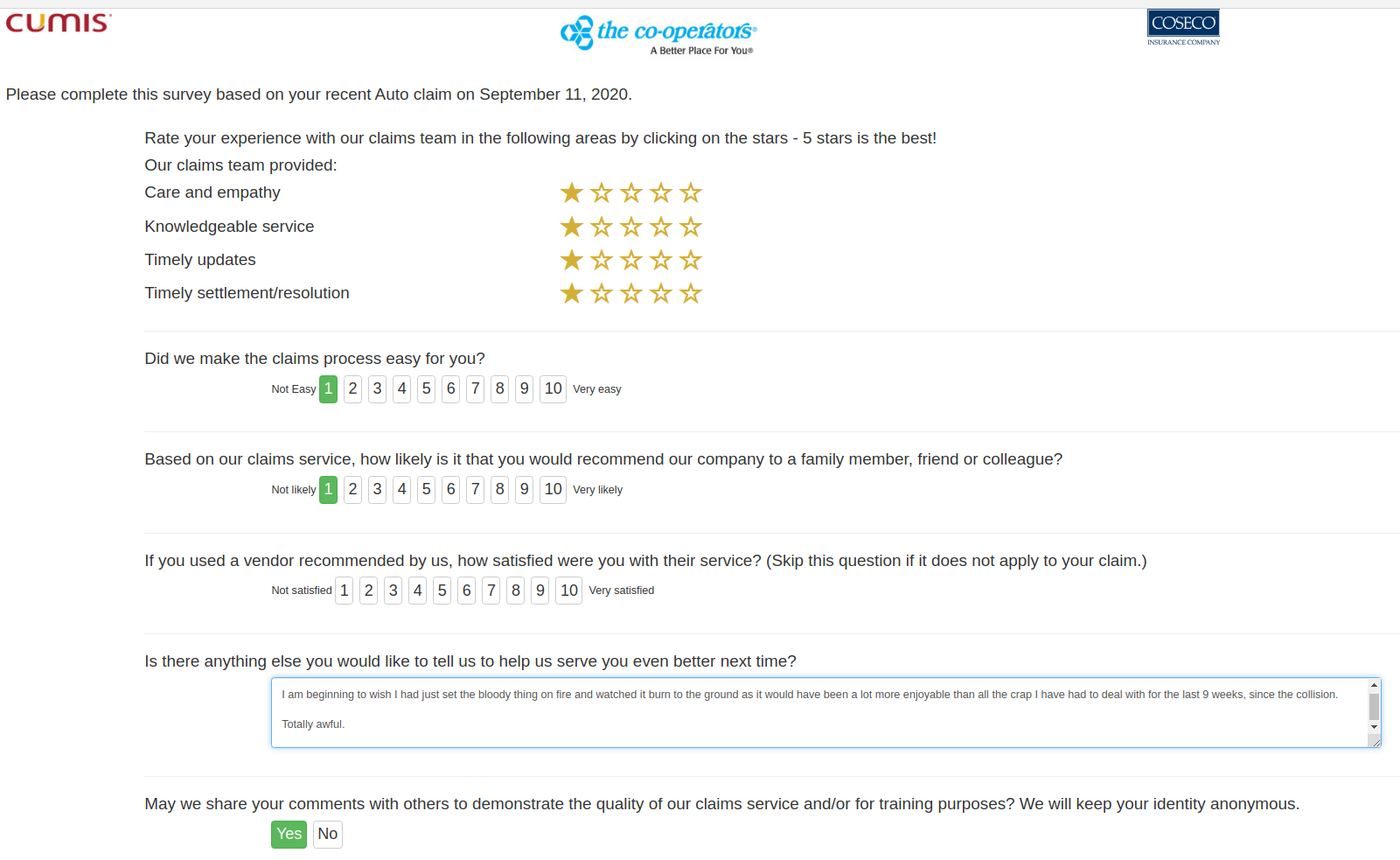 "Is there anything else I would like to tell them to help them serve me better next time?" They ask.
Where do I start, let's try with..
This was, by far, the worst interaction I have ever had with an insurance company.
First you tried to claim that my being rammed off the road and my window punched out by the other driver was all my fault, and refused to help me, then the agent went on vacation for weeks, and I couldn't get a response from anybody until I attempted to escalate it to the ombudsman.
When someone finally responded, and after I provided the explanation of what happened, for at least the 4th time, and included dash cam footage, again, showing that it was not my fault, I was finally able to take my car to be assessed.
The result was that the repair bill of $6500 caused my car to be written off, by you, rather than you getting the other insurance company to pay for it, as is your job. My car was declared a total loss, all for a small dent in the side, and a crack in the bumper cover.
For my car that I bought almost exactly 2 years prior, for $12500, you offered me $4700, which was insulting. I am expected to just lose $8000 for having a car for 2 years?
As this was unacceptable, I chose to keep the car, and accept the even more insulting $2600 you offered.
I repaired the car myself, which cost about $65 in supplies to repair the cracked bumper cover.
Then there was a bunch of nonsense with me seeming to need to call every motoring authority and police department in Quebec regarding this, and start the process of pressing charges against the other driver for smashing the window, because neither you nor the other insurance company was going to pay for it, and then it turned out he had provided false information to the police, leading them on a wild goose chase trying to even find him.
Even more frustrating has been the process of getting the money from you, as it required making my car "unfit", which has been a nightmare to get it made "fit" again. The smash repairer told me they would do it, but then stopped replying to my emails, so I had to keep going there in person to find out what was going on, and they kept coming back with one excuse after another for why they would not even do the safety inspection on my car, which they had told me they would.
They obviously just wanted the ridiculous $6500 for the repairs, and the small amount they would get out of me instead meant that I was not worth their time, so they just kept wasting mine.
I then gave up and went elsewhere, and have now ended up dealing with a mechanic that tried to scam me out of $2000 to replace all my tyres, and my brake pads and rotors, and when I replaced the brakes, found them to be almost brand new and in no need of replacement.
So, between the awful smash repairer providing the insane quote of $6500 for a cracked bumper and a ding that just needs to be bogged over, the scamming mechanic, your insulting payment amount, the difficulty of getting anyone to even handle my claim..
Wow, just wow.
I wouldn't recommend your services to my worst enemy, and I will be taking my business elsewhere, if I can ever manage to get the car to pass safety again from people wasting my time and trying to scam me.
I am beginning to wish I had just set the bloody thing on fire and watched it burn to the ground as it would have been a lot more enjoyable than all the crap I have had to deal with for the last 9 weeks, since the collision.
Totally awful.
The co-operators? That's a laugh. Who are you co-operating with? Everybody but me, it has become apparent.
I have been a customer of yours for 8 years, and I am now done.
I click [ submit ].

Did I know I can submit a claim online? I'm sure you would be even more responsive to that, vs trying by phone and email, and the agent just goes off on vacation for weeks and nobody replies..
Anyone got an recommendations of insurance companies that are not completely shit wastes of time and money?
Haha, yeah, I know, that's their whole point of existence.
Posted by Simon Quigley at 22:47